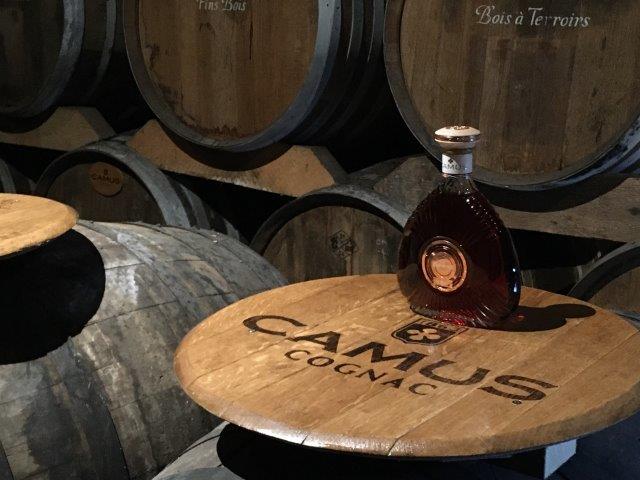 Deemed by many to be one of the best Cognacs in the world, Cognac Camus is one of the most refined and aromatic cognacs, made for the pleasure of those who appreciate the finer things in life. Fiercely independent, the company was founded in 1863 and is currently run by Cyril Camus, the fifth generation of this outstanding cognac family. Passionately run with an enduring and uncompromising philosophy of seeking the utmost quality and refinement, traditions run hand-in-hand with scientific and technological advances.
The remarkable aromatic intensity of Camus cognacs, results from a patented distillation technique, where portions of the initial distillate from the first distillation, often discarded by other producers, are re-introduced in the second and final distillation, which also occurs on the lees. This technique produces aromatics up to seven times the intensity of those produced through standard distillation.
Although not one of the big cognac houses, such as Martell or Hine, Camus has a well-deserved reputation for high quality, resulting in no small part from the aromatic intensity. Starting from humble beginnings by Jean-Baptiste Camus as a wine grower, through over 150 years of passionate endeavour, the company now employs over 500 people in 3 continents. Cyril Camus became the latest head of the company in 2003, bringing a wealth of ideas and expertise to the business.
Studying initially At Babson University in the States, he went on to the International School of Commerce in Beijing, immensely useful experience for a company with a worldwide market in luxury products. Using his international outlook and contacts forged in China, a market with a particular keenness for cognac, Camus opened a subsidiary in Shanghai in 2007.
The best cognacs are distinguished by both the intensity and complexity of their aromas and flavours. The patented distillation technique developed by Camus ensures intensity, whilst different ageing, blending and sourcing of the spirits, gives rise to an extraordinarily wide range of interesting and characterful cognacs.
The base wines, made principally from Ugni Blanc and Colombard grape verieties, are sourced from different areas of the Cognac Appellation, including the Borderies region, where the distillery is sited, and the vineyards of the Isle de Ré, a nearby island , known better for its tourism, lack of cars and multitude of cyclists. All the wines are distilled separately and then aged in oak casks, giving a wide range of subtly different spirits, ripe for blending.
Still keen to experiment and create new styles, the latest addition is the small batch Camus Caribbean Expedition, where casks of cognac were transported by tall sailing ship to the Caribbean, aged in Barbados for a further year and returned to cognac for final blending and bottling. A unique cognac, with both oceanic and tropical maturation, it has an explosion of flavour, with cocoa, spice, tropical fruit, together with poached pear and banana notes.
A range of Camus cognacs are available to purchase on-line in the UK through The Whisky Exchange and The Drink Shop. Alternatively, Camus is geared-up to accept and ship orders directly from their premises in cognac. All in the range are aged for far longer than the minimum required by the rules and all have the characteristic intensity of flavour.