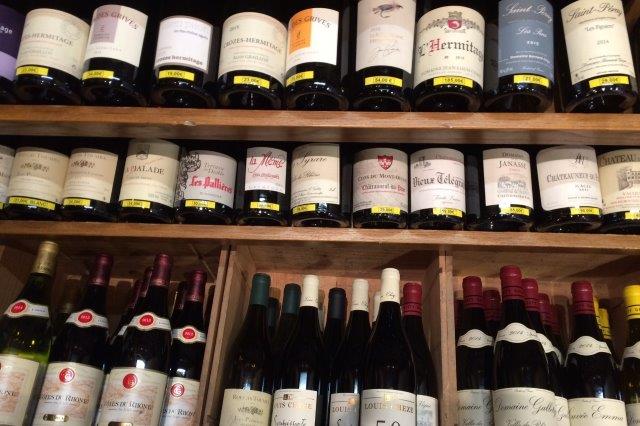 Six pages of close type in a wine list, with around 60 wines per page, and that's only the red wines from one region of France. This was the range of wines from the Rhone Valley in a specialist wine merchants in the fabulous city of Lyon. The shop is called Malleval in Rue Emile Zola and has been serving its loyal local customer base since 1869. Of course, there are wines stocked from all over France and the nineteenth century underground cellars hold some 40,000 bottles, with a value of around 2 million euros - cost price!

But with Lyon being situated between the Beaujolais vineyards to the north and the Rhone Valley vineyards to the south, the choice of wines stocked from these areas is going to be substantial for anyone who knows what they are doing. And the staff at this specialist shop are all trained sommeliers with many years’ experience in the wine business. Wandering through the labyrinthine cellars with one of the sommeliers as a guide, it was like visiting Aladdin's cave. There are over 40 different wines from the relatively lesser known Northern Rhone Appellation, Cote Rotie. Normally it's difficult to find more than two or three on anyone's list.

Côte Rotie - (nothing to do with grilled chops!) is a full-bodied red wine made from the Syrah grape in a tiny area of the Northern Rhone Valley. "There seems to be a resurgence of interest in wine from Northern Rhone" commented one of the knowledgeable staff of the owner, Monsieur Franck Jabouley. "Quantities are limited and thus prices are rising," he continued, " in contrast to Southern Rhone, such as the wines of Vacqueyras or Chateauneuf du Pape, where larger volumes create more price stability. "

Lyon is one of the great gastronomic cities of France, if not the greatest. Many of the world's culinary competitions originated here, such as the Paul Bocuse d'Or. My recent visit to the city thus had to involve meals in a number of different restaurants, of which there are a vast number. Bistros and brasseries are often called Bouchon Lyonnais, particularly in the characterful old town on the banks of the Saone river. And what better way to dine, than a meal with a different glass of wine from Northern Rhone with each course?

The perfect accompaniment to shrimp ravioli, was a white Crozes Hermitage 2015 from the producer David Reynaud, made from Marsanne and Roussane grape varieties. Dry, with plenty of body and succulent peachy fruit to balance the Thai spices in the sauce. Next course was roast pork belly with crackling in a red wine jus, with which the sommelier matched a red Saint Joseph 2014, from Domaine Jean-Claude Marsanne. This is made from the Syrah grape which has a great spicy and black pepper character, with good body and great length on the finish. Rather than a dessert, I chose the whole roast St Marcelin cheese. My sommelier suggested a white in preference to red and chose a stunning full bodied, flavoursome wine from the small Condrieu area. The 2014 from producer Francois Dumas, had amazing depth of fruit from the Viognier grape variety, for which Condrieu is famed the world over.

Whether or not you have the opportunity to visit Lyon, the wines of the Rhone Valley are worth exploring, since they are approachable, easy-going wines, yet with a substantial amount of flavour and oodles of character. Southern Rhone has perhaps more approachable wines from a budget point of view, but push the boat out just a little and you will be well rewarded by wines from the North of the region.