Harvest in Monbazillac After a Difficult Year in 2021 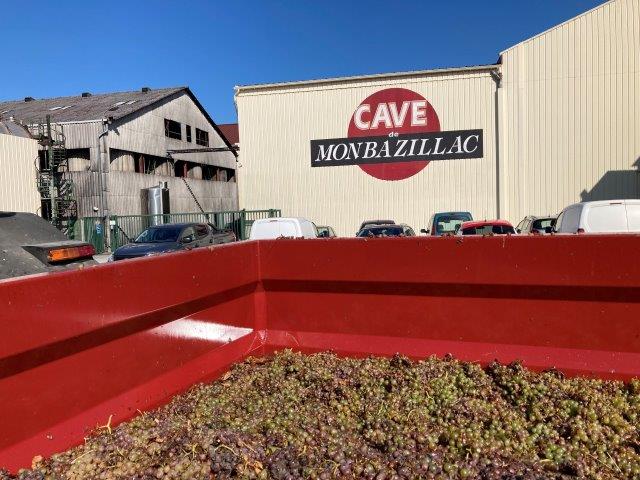 The vineyard region of Monbazillac in south-west France is the largest sweet white wine producing region in the world. Often being a more affordable alternative to its illustrious sister, Sauternes in the Bordeaux region, Monbazillac has its own defined character, usually being a little less sweet than most Sauternes, with greater expression of fruit and balancing acidity. For the last ten years, the tendency of producers has been to lower the residual sugar in the finished wines, with many now being 90 to 100 g/l rather than 140 or 150g/l 20 years ago.

Beset by problems caused by both the weather and the pandemic, the harvest (les vendanges) in Monbazillac is currently underway, being about one third through as of 18th October with another two weeks to go. According to Guillaume Barou, president of the Cave Cooperative de Monbazillac, the harvest in 2021 will be roughly half the quantity of last year, representing 1500 litres/ha instead of 2700 l/ha. He explained that frosts in April resulted in a 30% loss and the current wastage at harvest adds a further 20% loss, due to rot affecting the crop in both August and September.

Thankfully, since all Monbazillac is hand harvested, the rigorous selection of the pickers will maintain quality. Only healthy grapes or those affected by noble rot (good rot) are picked, with grapes affected by bad rot rejected. At this early stage it is too soon to determine final quality, but the estimate is of a lesser year than 2019 and 2020. Sunny dry, weather with misty mornings in the last 10 days has helped enormously, both for the pickers and for noble rot, but staff shortages both for picking and crucially in the chais, due to continuing effects of Covid19, have caused significant problems.

My brief interview with Guillaume took place at lunchtime, as the president himself was otherwise hard at work in the winery. There are many independent producers of Monbazillac, each with their own winery and slight differences in production methods. Some use oak barrels to mature the wine and others prefer a fresher style, using only stainless-steel tanks. The Cave Cooperative de Monbazillac has around 48 different vine grower members, with a production area of over 2750 acres of vineyards. The organisation also makes wine for other vineyards separately.

Some of the vineyards in the Monbazillac designated area are on a flat plain and it were these that suffered most from the late frosts in April, together with some others in a hollow. The vineyards on the hill slopes avoided much damage and also produce the best quality grapes. The best sweet white wines of the world, such as Monbazillac, have particular flavours and aromas resulting from the noble rot (botrytis cinerea to give the scientific name) which affect the grapes, eliminating some moisture and thus concentrating the natural grape sugars.

Personally, I have long been a fan of Monbazillac with its subtle, honeyed flavours, and sweetness balanced by freshness and fruit. A first-class accompaniment to duck paté, devils-on-horseback, roast chicken with wild mushrooms and creamy, blue cheese. Try it also with fruit-based desserts and white chocolate truffles.