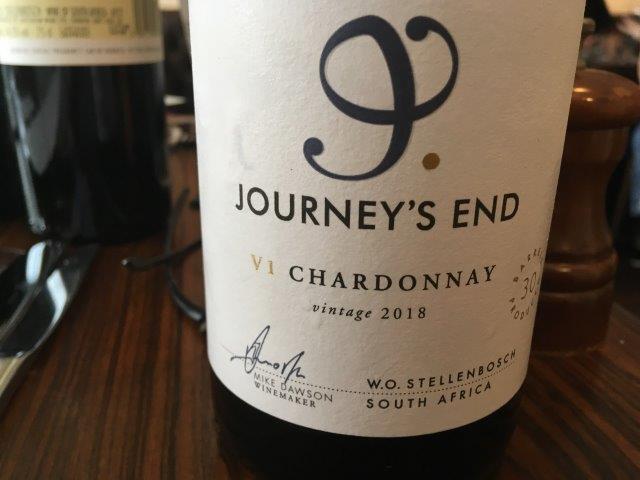 And the Journeys End was in Brighton! Mike Dawson is the young, dynamic winemaker for one of South Africa’s top vineyards, with the unusual name of Journeys End. At the age of only 29, he has already been winemaker for the estate for five years, having trained in his own country and also in South America. Last week, he hosted a lunch at the fabulous Gingerman restaurant in Brighton, in order to showcase a selection of the wines for which he is responsible.

The name ‘Journeys End’ refers to the fact that the estate is at the end of the Stellenbosch region, an area where the majority of the best South African wines are made. Cradled in the foothills of the Hottentot mountains, the estate is located quite close to the sea and thus benefits from the cooling Ocean breezes, which often can be more like a hurricane than a breeze! “The distinctly cooler climate gives us great opportunities to make delicate, elegant wines of great quality, but also can involve significantly more work both in the vineyard and the winery”, comments Mike. His philosophy is that of minimum intervention in his winemaking in order to produce wines of character, which reflect both the terroir and the climate.

Stylistically, Mike aims to produce wines which are designed for the modern wine consumer, but have their roots firmly implanted in old world techniques. The Chardonnays are all barrel fermented, using mainly French oak, but the barrels are turned to mix the lees, rather than stirred with a baton. Time in the barrel is strictly controlled so that the oak only enhances the flavours in the wine, rather than dominating them. The result is a delicious, modern, vibrant wine, with both fruit character and complexity from the judicious use of oak. Burgundian in style, yet with more than a nod to New World influences.

The range of reds is equally delicious, and Mike eschews the iconic South African Pinotage, preferring to craft elegant, yet deep flavoured reds from Cabernet Sauvignon, which performs particularly well at Journeys End. We tasted the Journeys End Sir Lowry Cabernet Sauvignon 2017, named after Sir Galbraith Lowry Cole, a romantic pioneer born in England in 1772, who became Governor of the Cape from 1828-33. During his tenure, he brought immense progress to the region, opening up trade to the Southern Cape by building a mountain pass.

The 2017 Cabernet Sauvignon is made from grapes on low yielding vines, again influenced by cool breezes from False Bay. After fermentation, the wine was matured 18 months in French oak barrels, giving exceptional depth and complexity to a wine from this region. Wonderfully rich fruit with full, mellow tannins and dark fruit character, with a touch of spice and chocolate. Satisfyingly long finish, this is great value wine at only £11.99 from Waitrose Cellar ( currently £3 a bottle off until 8th October). The Journeys End Chardonnay 2018 is also available from the same supplier at £15.49 a bottle. Old World wines from the New World!